KUALA LUMPUR: Police will never close the files on the murder of Nurin Jazlin Jazimin in 2007 and the abduction of Sharlinie Mohd Nashar last year.

“We have never closed old cases until they are considered completed. This means we will continue looking for the suspects and finding new leads,” Selangor police chief Deputy Commissioner Datuk Khalid Abu Bakar said during a meet-the-residents session at Taman Muda, Ampang yesterday.

Nurin was reported missing while on her way to the night market near her house in Section 1, Wangsa Maju on Aug 20, 2007. Her naked body was found stuffed in a sports bag and left in the stairwell of a shoplot in Petaling Jaya a month later. Five-year-old Sharlinie was reported missing while playing outside her house in Taman Medan on Jan 9, 2008, not far from where Nurin’s body was found.

Both the high-profile cases are believed to be linked to the Kampung Baru molester.

“Not all cases can be completed quickly because in some we need extra and more detailed information,” he said.

KUALA LUMPUR: Police have not forgotten Nurin Jazlin Jazimin, the 8-year-old girl who was abducted and brutally murdered last year.

Inspector-General of Police Tan Sri Musa Hassan said yesterday police were relying on a new technological breakthrough for fresh leads in the case.

A new party had recently approached the force, offering its help to use the latest technology to enhance the images contained in an essential closed-circuit television camera recording.

"Previously, we had given the United States' Federal Bureau of Investigation the recording of a motorcycle that was last seen at the place where Nurin's body was abandoned," he said.

"As you know, FBI's attempt to enhance clarity of the motorcycle's registration number was unsuccessful.

"But a new party has approached us offering help in doing the same thing, saying they have the latest technology to enhance the same image."

On the Ride for Change campaign undertaken by the Marginalised People's Network (Jerit), Musa described the participants as hypocrites.

"If you are fighting for democracy in a civilised nation and if you have a problem, then you should solve it through discussions, not through demonstration.

"For me, this is not democracy but 'democrazy'... crazy to hold demonstrations."

KUALA LUMPUR: The early alert system for missing children is already in place but it is not called Nurin Alert, after Nurin Jazlin Jazimin who was found brutally murdered last year.

"I've said it clearly that the name 'Nurin Alert' is not in our programme or part of our plans on child protection. But the whole mechanism and processes from A to Z have been discussed and is already in place," she said.

She had been sexually assaulted, murdered and her body stuffed into a gym bag.

The mechanism was modelled after the United States' Amber alert -- an emergency response system that galvanises the authorities and the community to locate missing children.

Dr Ng said the yet to be named emergency response mechanism was a major component of the proposed Child Protection Policy.

"We didn't use the name Nurin Alert. America used Amber Alert. We have not decided."

Dr Ng stressed that numerous meetings between her ministry, the police and non-governmental organisations had been held to realise the mechanism.

However, she pointed out that it was up to the police to act first in a missing child case.

"In our intense desire to save children, we must know what is the best mechanism to do so. The first thing to do when a child goes missing is to make a police report.

"We can't instruct the police on what to do. It is a police matter and they know how to handle it."

Dr Ng said it was inappropriate to "splash the news of a missing child in newspapers for the first few hours".

"This creates panic and they (kidnappers) may kill the child," she said.

On the task force investigating the alleged abuse of Penan women and girls, she said the outcome of the investigation would be made public next month.

"We'll leave no stone unturned. There is nothing to hide in this case.

"I will even go to the extent of saying that if we need to test the DNA of the child to find out who the father is, we will do that."

The New Straits Times carried the following article on 14th September 2008. Dearth of latest developements on Sharlinie and Asmawi, perhaps this article can remind us that there are more than the two missing children in Malaysia currently. One of them is Syed Ahmad Kushairi Syed Jamal.

FOUR years have passed since her son's disappearance but a 47-year-old hospital attendant doesn't let each black cross on the calendar break her spirits.

"Yes, I believe if he's alive, he will come back. I'm waiting for that day."

Casting a glance out of the window of her low-cost flat in Ampang, Mum Taj recounted the Saturday when her youngest son got lost.

"That time, it was like today. Raining. He was riding his bicycle."

The family, among the last to move out of the squatter area in Lembah Jaya Selatan, Ampang, was busy packing up when at 3pm, they realised something amiss.

His eldest sister went out in search for him, only to find the boy's bicycle lying by a monsoon drain.

Kushairi was cycling a few metres away from home for half an hour. That was the last his family saw of him.

A missing child report was lodged, the Fire and Rescue Services Department came and went, and Mum Taj has seen more than 30 bomoh.

A rescue officer told Mum Taj that from his experience, the boy didn't fall into a drain.

"I believe him, because Kushairi is afraid of water. Even in Sunway Lagoon, he didn't want to mandi. He'd hold on tight to us when he had to cross over some drains.

"I also know my son didn't follow a stranger because he's shy. He doesn't talk, play or go near any stranger."

All the shamans, said Mum Taj, told her that her son is alive.

(A relative took him away because of angst. The child is in someone's hands. Someone who is childless.)

Even before this revelation, Mum Taj's instinct told her the same.

A few more reports were lodged, the case was reclassified as abduction. Mum Taj has provided fresh information from time to time.

Calls to the police for updates all these years were always met with the response that they are too busy to meet us.

"People tell me not to worry since the bomoh said my son is being taken care of by someone. It's easy for people to say that. But I cannot live like that."

Mum Taj, who has four other children, is constantly worried about her son's welfare.

She doesn't know how well her son is treated, whether he has enough to eat.

"There's nothing much we can do but wait.

"In my dreams, my son hugs us and cries. He scolds us, asking why we never came and looked for him. It breaks my heart."
- New Straits Times
Posted by Jasni AJ at 6:54 PM 9 comments: 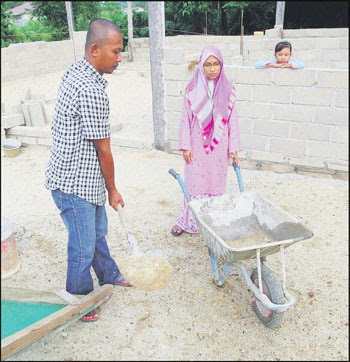 Mohd Nashar Mat Hussain and his wife Suraya Ahmad building their house. At right is their daughter Sharliena.

DUNGUN: The Central Terengganu Development Authority (Ketengah) will help complete the home of the family of Sharlinie Mohd Nashar, the girl who went missing from her home in Petaling Jaya, Selangor, earlier this year.

The family had moved here earlier this month to find peace and security and to start a new life, and Menteri Besar Datuk Ahmad Said has ordered Ketengah to aid them.

The family is staying at Sharlinie's paternal grandfather's house while waiting for their new home to be completed.

"I hope Ketengah can help complete the house as soon as possible to help ease the family's burden," said Ahmad, who is also Ketengah's chairman.

Ahmad added Ketengah would also look into other ways to help the family.

Sharlinie went missing from her home in Taman Medan in Petaling Jaya on Jan 9.

Sharlinie's father, Mohd Nashar Mat Hussain, 29, said Hari Raya celebrations this year would be a quiet affair as Sharlinie was not around.

"She was the most cheerful and loved to go to the Ramadan bazaars. She would also drag her siblings along to go out," he said, adding that Sharlinie loved otak-otak, rendang and lemang.

Mohd Nasar said a bomoh he contacted two weeks ago told them that his daughter was still alive and was in the country. 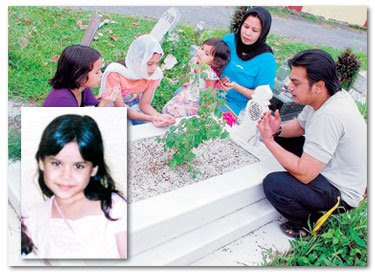