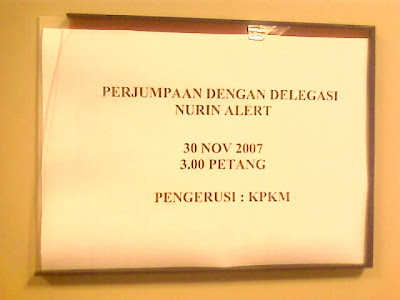 Today, coincidently being the 100th day since Nurin was last seen alive, a delegation of three CFNA Exco Members met the officials from the Social Welfare Department led by its Director General, Cik Meme Zainal Rashid. Others in her team were Dato' Shamsiah Ad. Rahman, Advisor to the Minister of Women, Family & Community Development; Pn. Nor Amni Yusoff, Director of the Department's Children Division; and En. Abdullah Hanafi of the Department's Legal & Advocating Division.

Representing CFNA were Nuraina, Hanizah@Tembam and me.

The meeting was basically convened as a follow up to the initial draft paper on the concept of Nurin Alert as previously submitted by CFNA to the Ministry of Women, Family & Social Development. At the meeting, the CFNA delegation was informed that the Social Welfare Department has been assigned by the Minister to follow through with the Nurin Alert initiative that would be treated as part of the Child Protection Policy.

With CFNA rendering an overview on the mechanism of the proposed Nurin Alert and the subsequent deliberations that follows, the sentiment on the rationale of introducing Nurin Alert as a vital mechanism that compliments the currently being drafted Child Protection Policy was mutually shared by both delegations.

The idea on the setting up of a Nurin Alert Centre which is to be funded by a Nurin Alert Corporate Partner as a pilot project was also discussed. To facilitate its setting up, it was generally agreed that the CCPC could be used as a platform to co-ordinate and secure the buying-in by the respective participants i.e. the Ministry, the Police, the Media, other related bodies and agencies as well as the public.

The meeting, though short, was indeed a further breakthrough for Nurin Alert. The bold but simple idea has indeed gained acceptance. There is definately no turning back, onward is the only direction for Nurin Alert.

p.s. There is also another significant event that took place on this 100th day. Thanks to Dewan Bandaraya Kuala Lumpur and all those who have helped, Nurin's parents collected the keys of their new home at the Ayer Panas Bandaraya Flats today. They'll move in Sunday. Alhamdullilah.

For other version of todays meeting, please visit Tembam's weblog at http://tembam.wordpress.com/2007/11/30/nurin-was-not-forgotten-today/.
Posted by Jasni AJ at 11:08 PM

Nurin will be the angel who will save hundreds of missing children via NURIN ALERT.

I still feel the pain in my heart when I think of Nurin and what she had to suffer for 28 days.

Nurin did not die in vain and her memory will be kept alive forever.

Despite all of us living in a unsafe environment, it is good to know that there are still many caring people like you, Tembam, Nuraina and the rest pushing for Nurin Alert.

Have a great weekend !