Serving with hearts of gold 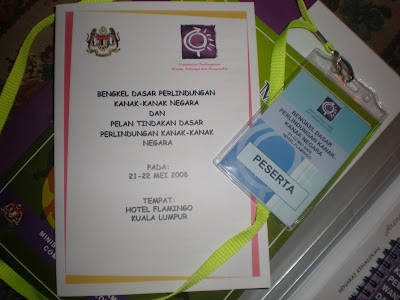 About a week ago, I received an e-mail from an officer from KPWKM (Kementerian Pembangunan Wanita, Keluarga & Masyarakat) extending an invitation to participate in a 2-day workshop on National Child Protection Policy organised by the Ministry.

Naturally, being part of the team initiating and promoting Nurin Alert, I accepted the invitation believing that I could utilise that platform to continue pushing for the incorporation of Nurin Alert into the National Child Protection Policy. But I forgot to asked on what capacity was I invited. Was it as Nurin's uncle or as representative of the Citizens for Nurin Alert Society (C4NA).

So a couple of days later, I called and asked, and in response, the officer told me that I would be there as a close relative to Nurin, the hideous crime victim that no Malaysians can ever forget.

Though I would not be there as a team member of C4NA (as I would like to), I had nevertheless contacted my fellow Committee Members for any input that could be forwarded in the workshop that I would be attending.

So come yesterday (21st May), taking a two days annual leave just to attend this event, I was at the Flamingo Hotel registering myself for the workshop.

To my surprise and beyond my expectation, the workshop was not an ordinary workshop that I am used to. The workshop was a grand "workshop" with 70 over participants with the Minister officiating its commencement! It was like full scale Conference!

I was initially tempted to dress casually for the workshop but luckily I put on my office attire instead. Also to be on a safer side I brought my neck-tie along, just in case. And what were the other male participants wearing? They were wearing suits! Oh my my! So I quickly put on the neck-tie and hence avoided myself from having this inferiority complex amongst the Datuks, Professors and experts in the field of child protection, all of whom are the big names in the country.

At the registration counter, the reception lady asked for my name and from which organisation I was from. So I told her my name and told her that I'm not representing any particular body but on my personal capacity.

So the lady went on searching for my name from the very long list and alas, we found my name. Guess what was stated in the attendance list? It's Encik Jasni Abdul Jalil (Penulis Blog Nurin)! And the "Penulis Blog Nurin" was in bold! 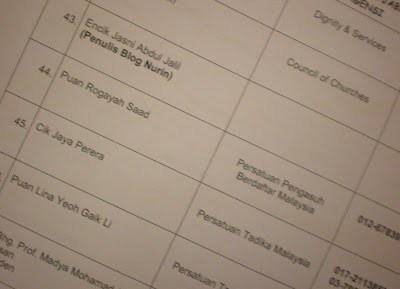 Wow, this is a surprise, an extraordinary surprise. I have never thought that a "Penulis Blog" could be invited to an event alongside the 70 over experts representing a fairly comprehensive cross section of the stakeholders in the area of child protection. What a recognition!

Frankly, before I accidently became a "Penulis Blog", I had never participated in any big event that had nothing to do either with my work, my involvement in community affairs or my studies. Child protection issues was never my cup of tea until I got stumbled into our frantic search for the then missing Nurin.

When Nurin was discovered, dead, battered and abused, encouraged and supported by a group of concerned citizens, we started initiating Nurin Alert, a mechanism modelled after the much successful USA's Amber Alert, with the hope that no one else would face the bitter experience endured by us in searching and rescuing Nurin.

It was due to this affiliation with Citizens for Nurin Alert that made me started to read more about child protection, started to meet influential personalities in pushing for Nurin Alert, started to give talks on Nurin Alert and of course started to write on the subject matter, though mostly are reproductions of reports and articles written by someone else but having relevence to the Nurin Alert initiative or anything on Nurin's tragedy.

Before Nurin, I was just anyone else, fully oblivious on matters that we thought was not really affecting us. We like to leave these daunting tasks to someone else, anyone except us.

And by attending the 2-day workshop, I had for the first time witnessed a group of people, people with hearts of gold, pouring energies and total passion in the cause of ensuring a better life of others.

They spoke with genuine passion, they act on their sincere believe and they divulge their time and energy for a cause that does not not bring in monetary gains but loads of other people's problems that they have adopted as theirs.

Hearing their pleas and their narration of incidences moved my emotion. On several occasions, I was teary eyed at the edge of crying listening to the sad stories they relayed.

I am now also convinced that the nation is indeed heading towards achieving an environment of safe haven for children judging from the multiple strategies and action plans of the proposed National Child Protection Policy.

Whether Nurin Alert will ever materialise as Nurin Alert in name is not that very important, the important thing is that the nation will be prepared to react appropriately, swiftly and effectively so that there will never be another Nurin, another Sharlinie, another Asmawi.

The mechanism applied for Sharlinie and Asmawi was good, the mechanism was indeed ala-Nurin Alert. What is required now is the formalisation of the mechanism so that the response to a missing child incident would not vary depending on the personalities handling the matter or whose child went missing.

One of the strategy identified in the workshop is the establishment of an early warning system to protect children in need of protection. And towards this aim Standard Operating Procedures for each and every scenarios would be developed.

Though my involvement in the workshop was rather minimal, but seeing that efforts are being taken to address all issues affecting children, including those missing, I was indeed reassured that all those attending the workshop was on the same page as we in Nurin Alert are.

I am glad I attended the workshop. I hope to get more invitations to attend such events, not only to learn more but to progressively learning how to be a better person in helping others other than thinking about yourself and your family all the time only.

Kudos to the participants and the organiser of the workshop. You are truly the gems of the nation, the saviour of the children of the nation. You also have my utmost admiration.

KUALA LUMPUR: The police will embark on a roadshow to kindergartens to highlight to preschoolers the do's and don'ts to keep them safe.

City police chief Deputy Comm Datuk Muhammad Sabtu Osman said the roadshow, to be launched this year, would include talks and mini exhibitions on crime prevention.

“We want to impart the 10 golden rules on safety to these kids to identify danger and to react to situations,” he said after launching a joint anti-crime project themed Towards Safety, Unity, and Harmony 2008 yesterday.

The joint project by the police, RakanCop and Smart Reader Worldwide Sdn Bhd is part of the RakanCop for Kids programme to be launched this year.

Getting kids involved: Children performing during the launch of the anti-crime project in Kuala Lumpur on Monday.

DCP Muhammad Sabtu said the police also hoped to erase any fear the children may have of the police.

“Most pre-schoolers are four to six-years-old and that would be the appropriate age group to expose them to the awareness of crime and how to prevent it from happening,” he said.

He cited as example the brutal murder of seven-year-old Nurin Jazlin Jazimin, whose body was found stuffed in a bag at a staircase in Old Klang Road last September.