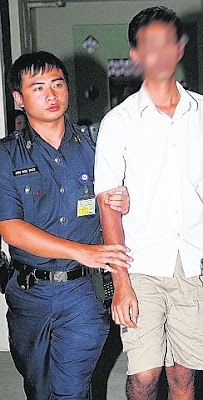 The suspect being led away by a police officer. -- Pictures: SHIN MIN DAILY NEWS
Caught after angry dad tracks him down

IT WAS a harmless game of hide and seek, and she was covering her eyes with one hand and counting down when she allegedly felt someone pulling her arm.

Her first thought was that one of her cousins was playing with her.

But when she lowered her hand, five-year-old Annie (not her real name) realised with a shock that the person standing next to her and holding her arm was not her cousin, but a foreign worker.

The foreign worker then allegedly tried to pull her towards the lift, but she put up a struggle.

Her cousins, who saw the incident, dashed home to get help from the adults.

In the meantime, Annie managed to break free from the man's grasp. He then left quickly.

The incident happened on Saturday evening when Annie and her cousins were playing in the eighth-storey corridor of an HDB block in Bishan, where they had gone to attend a wedding.

When Annie's father and other adults dashed out of the flat, they found Annie standing alone in the corridor.

Relief turned quickly to anger when Annie told her father what had happened.

Annie's father, a manager in his 40s, told The New Paper over the telephone yesterday: 'Why was he holding my daughter's hand? Nobody should touch anybody else's child. It is wrong, no matter what his intentions were.'

'What would have happened if my nieces didn't see (the incident)? I was worried that it would have been a repeat of the case in Malaysia,' he added, referring to the case of eight-year-old Nurin Jazlin Jazimin, whose body was found in a bag days after she went missing.

When asked what state Annie was in when he found her, her father declined to comment, saying the case was under police investigation and he did not want to complicate matters.

By the time the adults found her, the man was nowhere to be seen. Annie's father asked her what he looked like and then organised a search, dividing the people involved into teams.

Annie's father later spotted a man matching his daughter's description sitting at a pavilion near the void deck of the block where the incident happened.

He took Annie and her cousins to the pavilion to confirm that it was the same man who had tried to pull her into the lift.

When they said he was the man, Annie's father rushed up and confronted him. He said the suspect did not resist.

But when Annie's mother asked him why he had pulled Annie's arm, the suspect kept repeating that he had not done anything.

A relative then called the police.

According to Shin Min Daily News, when the police arrived, the suspect was sitting in the pavilion, with his face resting on the table.

A police spokesman said the suspect, a 25-year-old worker from India, has been released on bail.

The police are investigating this as a case of wrongful restraint.