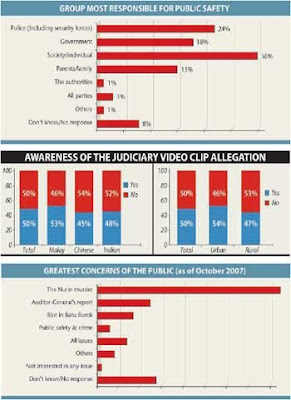 IN tracking voter sentiment on public safety -- another major concern apart from the economy -- the findings of the Merdeka Center survey noted a marked increase in the level of concern since April.

The survey attributes this to various reports of high-profile crimes during this period.

They include numerous robbery and snatch theft incidents, as well as cases such as the reported allegations of gang activities in Sarawak in April, as well as a June gathering by a group of people in front of the Johor menteri besar's residence to express unhappiness over the crime situation.

The high level of concern by respondents carried through to August, when the story of a missing 8-year-old girl grabbed public attention.

The discovery of Nurin Jazlin Jazimin's body the next month further increased public concern. Nearly 100 per cent of respondents said they were aware of the case, with over 90 per cent expressing concerns over child safety.

The survey found that crime and violence against children came second on the list of concerns. It was prevalent among one in every six respondents.

Despite the worries, there was a near even balance between respondents who felt public safety to be mainly a family and societal responsibility, as opposed to those who believed that it's mainly the government's responsibility.

The survey noted that voters were also moderately satisfied with how the police was working to prevent crime.

The survey concluded that public safety could become one of the issues that would affect public sentiment in the coming general election, with nearly half of the respondents reporting as such.

In listing voters' top concerns, what was also striking were some of the things that the respondents collectively placed lower on their list of immediate priorities.

They include some of the other hotly-debated public issues over the past year, such as racial inequality and a lack of racial integration.

However, only half of the respondents were aware of another current topic -- the video clip controversy over alleged fixing of judicial appointments. At present, the public issue of greatest interest to respondents remains the Nurin case. Over 43 per cent cited it as the issue that they were most concerned about.

That's more than three times the number who cited the auditor-general's report (12 per cent). The illegal assembly incident in Batu Buruk, Terengganu, came in at a distant eight per cent.

Crime is rising and will continue rising unless there is some positive and proactive measures done by the Police. The public will say its Police's responsibilities, and the Police will say it's also public's responsibilities. How about both working hand in hand to fight crime. If you expect our good neighbours to volunteer to help out, it will never happen. However, the Police can come up with a programme and get all involve to work closely to fight crime.

It shook the nation when Nurin's body was found, everyone was sad, shocked and some even cried. Now, few months have lapsed and are our children or us any safer than we were before Nurin's case? I totally doubt so. Can my children roam freely at public parks without my supervision, I doubt so. Will Nurin be the last case, a definite NO, it's proven after Presheena and Kha Man's cases.

We do live in a cruel world and it's made worst when we have perverts living among us, stalking our children. Can they ever be safe, I certainly dont so. While there had been great progress with Nurin Alert by caring citizens, all of us are left to look after ourselves amidst high crimes.

The town I lived has probably the highest snatch thieve cases, almost every person I met knows someone who has been a victim. While we take all precaution to safeguard ourselves, our bags, our children, there is no change or improvement in the current situation.

At the end of the day, it's everyone responsibility and I am still looking forward to the day the public can work closely with the authorities to improve living conditions. The Police CAN come up with some proactive measures to work with the public, it's all up to them on what is the priority and commitment. However, I think they are busy with roadblocks and polishing their water cannons, all in name of security, upholding peace or plainly following instructions. Not much value to the people like me as far as security or crime prevention is concerned.


moral of the story, pls lock your fence and grille when the kids arearound and while u r doing u chores at the back.