PETALING JAYA: Another girl has gone missing. This time the victim is five-year-old Sharlinie Mohd Nashar who disappeared while playing about 200m from her house in Taman Dato Harun on Wednesday. 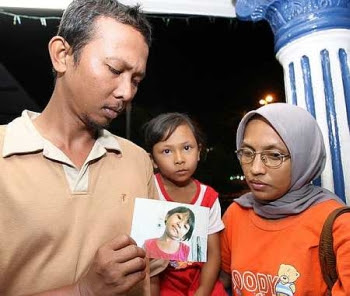 Missing: Mohd Nashar holding Sharlinie’s picture as Suraya and Sharliena look on at their home in Taman Dato Harun, Petaling Jaya, on Wednesday.

Police are not ruling out the possibility that the “Kampung Baru molester” – the man responsible for the cruel killing of Nurin Jazlin Jazimin – could have abducted Sharlinie, the second to be reported missing in the Taman Medan area in two days.

On Monday, a six-year-old girl was abducted by a man on a motorcycle when she was playing alone near her flats in Kampung Sepakat, Taman Medan, about 2km from where Sharlinie went missing.

The girl was found three hours later in Wangsa Maju in Setapak. 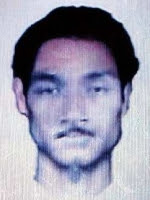 Photofit of molester: Police do not rule out that the Kampung Baru molester is involved in the case.

In the 11am incident Wednesday, Sharlinie had followed her sister Sharliena, eight, to a playground about 200m from their double-storey link house in PJS 2.

Half an hour later, Sharliena decided to return home but Sharlinie did not respond when she called out to her.

Sharliena rushed home to inform her mother, Suraya Ahmad, 28, who went to the playground to search for Sharlinie.

“Anyone who has seen this child at the playground or its vicinity must contact us immediately. She is just over 1m tall, about 20kg in weight, has short hair and a tanned complexion.

“We have formed a task force to find Sharlinie and our focus is to locate her. The incident is similar to the case of the six-year-old girl who went missing on Monday,” he said.

Sharlinie's father, Mohd Nashar Mat Hussain, 29, said he hoped his daughter would be found as soon as possible.

“I appeal to the public to help find her before anything untoward happens to her. I am sure someone would have noticed the two kids playing there,” he said.

I read about this in the papers today... it's awful. Our worst fears confirmed, another child has been abducted. Let us pray for her safety and return :(

we have to do something about this.. if the police can't do anything, then we have to do something.. distributing pictures to public is not enough.. i suggest that a massive search party at PJ area to be conducted with police and rela help.. at least we could prevent serious matter from happen..

in my opinion, suspects is challenging the police and authority.. hopefully we don't hear findings of another body.. =(

Deep down in my heart I pray that Sharlinie is found unharmed and I plead to the abducter to take pity and let her return home.

I am an aunt to a 6 yr girl and I understand how a child wd feel when she does not see any1 familiar to her near her.

On the same note i wd also like to add that I will never imagine letting my niece walking even 1m awy from me. She is my niece and I feel as such therefore how can parents knowing the situation nowdays lets them go as far as even 200m on their own. They are young thus can't comprehend the danger that lurk nearby. They need to be guided at every step. That is why we children need parents.

Pls parents times are not good pls guard our children with all our lives. No point crying after they are gone.

Sharlinie may u be united with ur family soon.