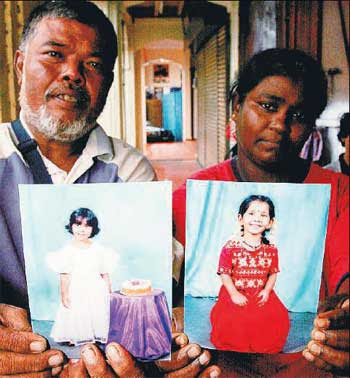 Ahamad Omar and his wife Salmah Sellamah Abdullah with photographs of their missing girl Rekha Ahamad.

Ten-year-old Rekha Ahamad left her squatter home in Kampung Kolam alone at 9pm on Monday to buy a VCD at a nearby night market.

She has not returned.

Police are baffled why her stepfather, Ahamad Omar, 49, allowed Rekha to leave home alone at night.

They are also puzzled why the girl wanted to buy a VCD as there is no electricity supply to their house. They don't even have a VCD player.

Rekha, a Standard Four pupil of Sek Keb (P) Island at the city centre here, was last seen leaving her home after she managed to coax Ahamad to give her RM5 to get the VCD.

Her mother, Salmah Sellamah Abdullah, 41, was at work at a factory in Bayan Lepas at the time.

Rekha, the sixth of seven siblings, was wearing a white T-shirt with the "Ultraman" character printed on it, and a pair of shorts, when she left home.

Ahamad said it was not the first time he had allowed his stepdaughter to go out alone.

"She always goes for a walkabout near our house and has never encountered any problems.

"She always returns home around 8pm or 9pm but I don't know what happened on Monday. She left and never returned," he said when met at home yesterday.

Ahamad said he and a few neighbours went out to search for Rekha when she failed to return home about midnight.

The couple lodged a report at the Central police station early on Tuesday morning.

"We are worried sick about her. We have not seen her for three days and we just don't know where she could have gone," said Ahamad, a sidewalk trader.

Asked why Rekha wanted to buy the VCD although their house did not have any power supply, Ahamad said his stepdaughter usually watched movies in a relative's house nearby.

Salmah said she had been praying hard for Rekha's safe return.

Meanwhile, Northeast district police chief Assistant Commissioner Azam Abd Hamid said investigations were ongoing and police had yet to pick up anyone in connection with the case.

"We view this case seriously as there have been many similar cases before this. We will intensify the search for the little girl," he added.

Rekha's disappearance comes in the wake of Nurin's murder, which, more than a month after her body was found, remains unsolved.

It was reported that Nurin, a year two pupil of SK Desa Setapak, went missing on Aug 20 after going to a night market near her house at Section 1 Wangsa Maju in Kuala Lumpur.

Her naked body was found stuffed inside a sports bag placed at the bottom of a staircase at a shoplot in Taman Petaling Utama on Sept 17.

I saw the list "SOME OF THE FRIENDS OF NURIN ALERT", are these all those whom had registered via sos@nurinalert?

I will not accept the excuse, "But she's gone out many times around that time and nothing ever happened to her." Parents are just idiots when they say that. It is because she's gone out so many times at that particular hour that the kidnappers/rapists were able to establish a pattern and lie in wait for the poor child to be their victim.

I don't understand why parents still allow their children to go out walking by themselves, let alone AT NIGHT! Again, let us not let Nurin's death be in vain! Have they not been listening to the radio, reading the papers, watching the news? It angers me how parents can be so foolish. Some part of me wants to say, "Serves you right for being so ignorant and careless." God gave us all brains to think and discern.

There is some sympathy, but I am extremely angry at the stepfather of this 10-year old girl. I will be praying for her safe return. We can't blame the police and the "Pak Menteri" all the time. We should strive to be more responsible. The change begins with ourselves. We have to stop thinking that we live in the "good old kampung" where everyone knows everyone and nothing bad ever happens. That's like letting danger in when it comes knocking on your door.

Nurin Jazlin is still in my heart. I am busy today got to do some exam but I never forget dear Nurin Jazlin. The culprit must be caught and punished and for the first time I agreed with hudud law. He should be killed when caught! I will be back to the blog when my exam over today.

We can now breathe easy that Recha is home now - safe & sound... I found it quite surprising that her parents allow her to go out by herself till past 7pm... At the same time feel sorry for the family...maybe 'Bersamamu' team should pay them a visit - help them in term of long run (a)permanent job to the father (b)better housing (c) zakat/welfare...
Lastly - we must continue praying for the killer/s to be caught! As always, Al-fatihah to Nurin.