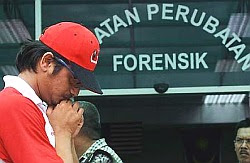 - Photo : The Star
ANXIETY turned to relief for the parents of eight-year-old Nurin Jazlin who has been missing for 26 days.

Jazimin Abd Jalil and Norazian Bistaman feared the worst when they were called to Kuala Lumpur Hospital to see if the body found in a bag in Petaling Jaya Utama was their daughter.

But they emerged from the mortuary relieved. Jazimin said they were certain that it was not their daughter, judging from the face, skin colour and body.

“I thank God it is not Nurin. I believe she is still alive and will be found,” said Jazimin.

However, blood samples of the couple were taken for DNA comparison.

“Although there are no leads as to where my daughter is, I believe we will be reunited. I will search for her until she is found.” When police called him at 1pm yesterday, Jazimin admitted there were many things on his mind.

“We were nervous but gathered enough strength to go to the mortuary.

“I know my daughter. One look at the body and I knew it wasn’t her,” he said.

Jazimin appealed to the public to help him look for Nurin.

“They can call me or police. I’m begging for your assistance.” On Aug 20, Nurin, a Year Two pupil of Sekolah Rendah Desa Setapak, was reported missing after going to the night market near her house.

Many parties have offered help to locate the girl, who suffers from kidney problems and high blood pressure.

what kind of headline is that?

The "headline" is the actual title of the article as it appeared in the Malay Mail.

While I'm not quite sure of your actual intent of the question , but I would think that the "headline" within its context attempts to illustrate the feelings of Nurin's parents upon comfirming that the body they were asked to identify was not of their child's.

The "murdering" of the child found by the police is indeed deplorable and every effort must be taken to bring the sick criminal to justice.

*Thank God it's not Nurin* so what is it OK that it*s Nurin? We have lost our hearts. It takes an innocent young girl to go missing to bring our hearts together.We never learn from the Yin that has left the Yang and now the Nur (light) in.I am not joking..I am serious.

i feel so sorry 2 hear abt nurin's died... i hope she will b placed with the good souls... may Allah bless her forever... for the family, be strong as all tis came from Allah & there is a good things behind a bad things...